The first chapter of Alpha Omicron Pi’s rich history began here, at Barnard College of Columbia University in New York City. Barnard was the first college in New York where women could receive the same rigorous and challenging education that was available to men. From the very beginning, Barnard was a place that took women seriously and challenged them intellectually. The idea for such a place as Barnard was bold for its time and it was in this setting that another bold endeavor developed. Barnard’s “Great and Glorious Class of ‘98” included four particularly outstanding women: Stella George Stern (Perry), Jessie Wallace Hughan, Helen St. Clair (Mullan) and Elizabeth Heywood Wyman. These women were destined to leave a great mark both on their college and on a new fraternity they would create and embrace for their lifetimes. So, from within the great history of Barnard College emerged the grand testament to friendship, scholarship, and service that was to become Alpha Omicron Pi. Stella, Jess, Helen, and Bess became four firm friends determined that their friendship should last a lifetime. In their junior year, on December 23, 1896, the four climbed the stairs in a small gallery of the old Columbia College Library (now Low Library), which led to an old and seldom used room, where the four pledged to each other.

On January 2, 1897, Alpha Omicron Pi was formally organized at the home of Helen St. Clair. Soon afterward, the four pledged AOII’s first initiate to AOII’s Alpha Chapter, Ann Richardson Hall. Over the next 100 years, we are proud to say AOII has expanded across the United States and Canada, adding to its ranks 204 collegiate chapters and over 155,000 initiated members. After Greek Life at Columbia was abolished in 1914, Alpha Chapter was finally reestablished in Spring 2013. 118 years since our founding, Alpha Omicron Pi boasts the most collegiate chapters of any other Panhellenic sorority in North America, and we are honored that this amazing organization all started on our campus. Wherever you go, you are bound to find a sister somewhere! Alpha Chapter is beyond privileged to be able to keep our Fraternity’s rich traditions and rituals alive today.

Fun Fact: The photo below is of our Founders and AOII's very first ever initiate, Anne Richardson Hall, walking down the steps in front of Low Library! 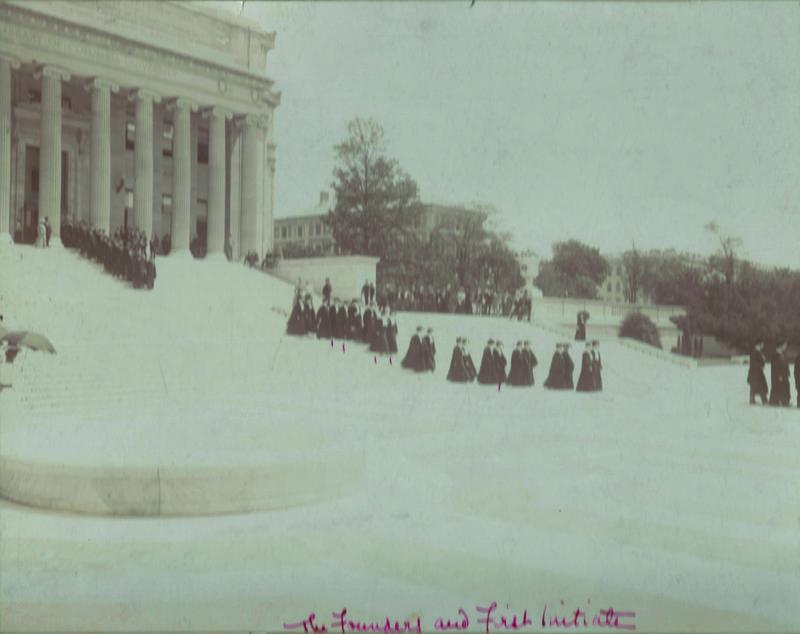